Home » Blog » Category » Migration » When There is Bread and Butter… 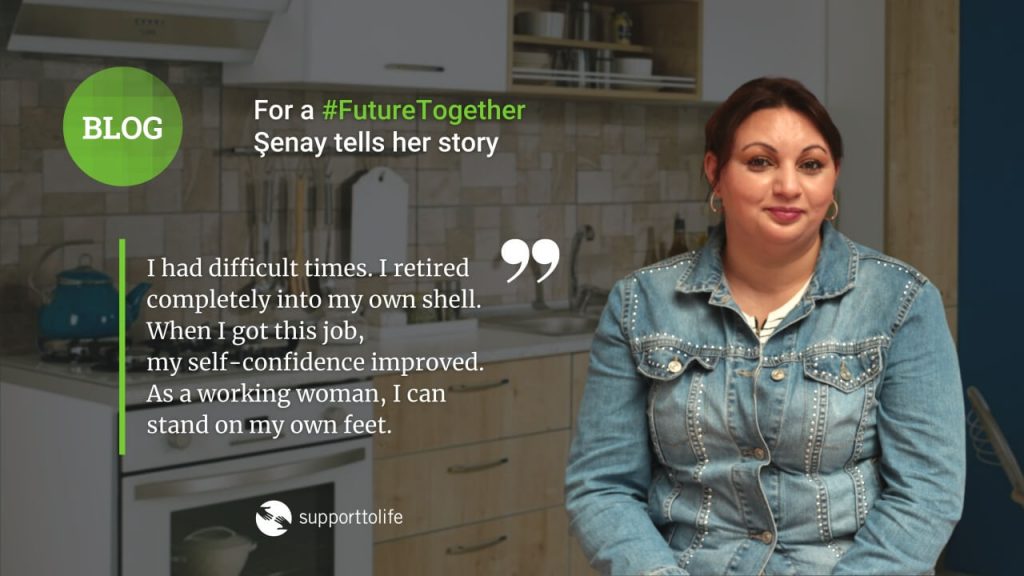 Standing tall on one’s legs and keeping head above water is definitely precious for everyone. For Şenay who got a divorce from her husband and came to Turkey from Bulgaria 5 years ago, having a job is not just about putting bread on the table, it is also about believing in herself again, taking care of her son, going out in public, being able to dream…

“I am living with my family, I am divorced. I had difficult times. I retired into my own shell and barely had a word with anyone. Thanks to Support to Life I got a job, built my confidence and my spirits lifted. As a working woman, I stand on my own feet.”

We took the field in June to conduct brief interviews to understand how our livelihood support activities in Istanbul affected people in need. While we were making our preparations at the garden of Support to Life House in Küçükçekmece, two women appeared. We smiled behind the masks we all have on due to the pandemic and greeted each other. Şenay had come to our meeting with her mother. We took our seats, leaving some distance in between, and started our conversation.

36-year-old Şenay is one of the participants of The Short-Term Employment Project, financed by German Federal Ministry for Economic Cooperation and Development (BMZ) in the scope of PEP – Promotion of Economic Prospects Program and implemented in İstanbul by Deutsche Gesellschaft für Internationale Zusammenarbeit (GIZ), Support to Life (STL), and Küçükçekmece Metropolitan Municipality. She got a divorce in 2014. She returned from Bulgaria to Turkey to live with her family a short while later. While going through this sharp change in her life, Şenay had a rough time both financially and mentally. Her first goal in her home country, to which she returned alone, was to bring her son, whom she had to leave back. It took overcoming many bureaucratic obstacles but Şenay finally got reunited with her son. However, all such processes added new burdens to her already tight budget. Struggling with new obstacles caused the tired Şenay to withdraw into herself day after day.

I ask Şenay to describe her new life in Turkey. She says: “I came to Istanbul with a 3-month visa initially.” When she first arrived, she could not foresee what would happen afterwards. Then she received living permit followed by citizenship two years ago. In this process she worked in whatever jobs she could find, trying to put bread on table. She cleaned apartments, did babysitting, worked as an attendant at school shuttles. However, no jobs could give her a standing, regular income. In addition to all these, she was trying to cope with depression. The pandemic broke out.

She applied at İŞKUR (Turkish Employment Agency) for a regular job. She heard about the Support to Life project thanks to İŞKUR. In early February she started working as cleaning staff at Sefaköy Children’s Bureau, which is within the Police Department. Şenay also started receiving psychological support from Support to Life team.

When we ask her about her daily routine, she starts talking about it with joy. She gets up at 7 a.m. and leaves her house at 8:30 a.m. to start working at 9 a.m. The first place to clean is the chief’s room while the tea is brewed. This is followed by other rooms and tea-coffee services. Leaving office at 5 p.m. and going back home. After the talks about this routine, she adds: “In this period I felt I was not alone thanks to Support to Life and I got stronger with the support I received. As I worked I understood I could do better and I became ever more confident. Now I feel much better.”

Our conversation takes a merry turn. New job, new friends… Supporting each other despite challenges of the pandemic… Şenay jovially describes clean clothes her colleague brought for her son. The way she describes the change in herself is etched on my memory: “After I got a job I started getting out of my house on my own.” She emphasizes that earlier she could not find the courage to do even that. Then it becomes the turn for dreams, plans for the future. She complains about the damp, stove-heated flat they are currently living. She dreams about leaving this rental house and living in her own apartment someday. She says she is trying to support her son to get over his psychological problems. She believed she could set everything right once she has a regular job. I remember our slogan: means of livelihood, source of life. I think about how important an income-generating, regular job is, especially for a single mother. How Şenay describes her dreams with a smile on her face makes me happy.

I would like to thank Şenay once again for sharing her story with us. Best of luck…