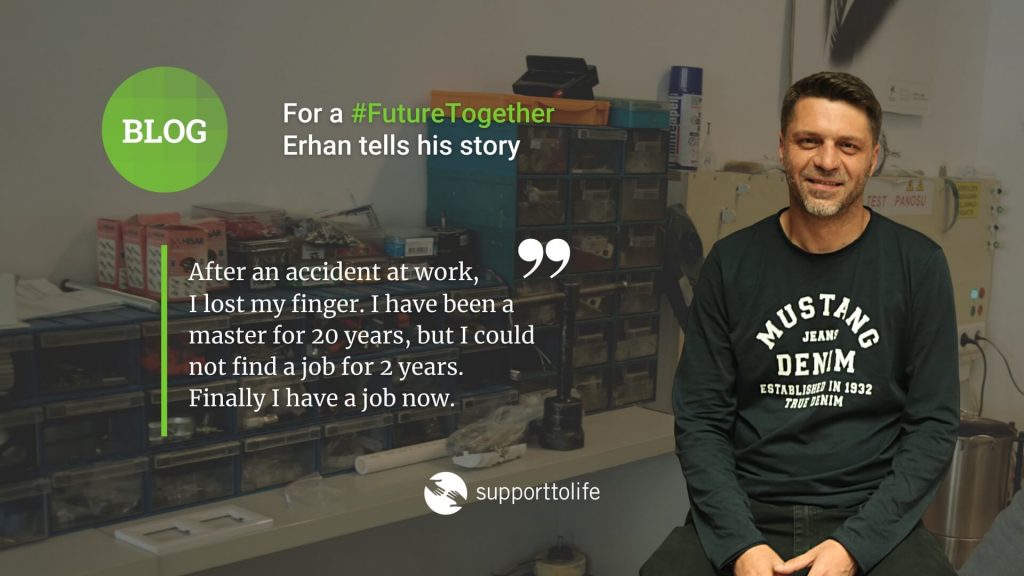 Erhan is one of the participants of the short-term employment project in İstanbul, which we initiated to breathe life into financial state of vulnerable populations especially during the pandemic. Erhan, who was rejected in job interviews several times on the grounds of his disability after a work accident, says that he is psychologically and financially relieved and more hopeful for the future.

The 39 year-old Erhan is one of the participants of The Short-Term Employment Project, financed by German Federal Ministry for Economic Cooperation and Development (BMZ) in the scope of PEP – Promotion of Economic Prospects Program and implemented in İstanbul by Deutsche Gesellschaft für Internationale Zusammenarbeit (GIZ), Support to Life (STL), and Küçükçekmece Metropolitan Municipality.

Erhan cut his ring finger in a work accident early 2019. Fortunately, he was working as a registered employee and he was able to receive allowance from Social Security Institution (SGK) for about 6 months after the work accident. But after his treatment, SGK allowance was discontinued. On the other hand, he did not get any support from the firm and even they did not call him to ask about his health status.

After he had to leave this work because his finger was cut off, he tried to earn a living for himself and his family by working in daily jobs. During this period, he applied for 28 jobs and all of them rejected him because of the situation of his finger. Once, he tried to hide his finger under the table during the job interview but when they realized that his finger they rejected him by saying that they would not be able to recruit him because his injured finger would be a ‘high risk’ in the work. 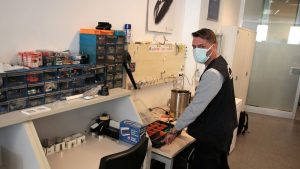 Erhan, who has a 5% disability rate, could not find a job. If he did not have his own house, he could not pay the apartment rent and he would stay on the street with his family. Erhan was now fed up and gave up looking for a job until he encountered Support to Life with the GIZ project.

When he decided to apply GIZ project, he had some hesitations from his previous experiences. While he was going to the job interview with requested documents, he was worried about his situation. But unlike his previous interviews, he was closely taken care of by the STL staff who were trying to facilitate the recruitment process as much as they can for him. “STL staff was kind and they don’t have any prejudge”, he says.

Now, Erhan working as a welder (his own profession) in the Technical Works Department’s Maintenance and Repair Unit of Küçükçekmece Municipality and earns his own living. He has met others working in different professions in his team. He thinks that when this work is over, he may find another job with the help of his new connections here.

Erhan thinks that people with disabilities should be given an opportunity without prejudice to show themselves. Even though he is working in a short-term employment project, he is not anxious anymore when he wakes up to a brand new day and he says he’s feeling happy; psychologically and financially relieved because he has a job and regular income. Erhan hopes that this project will provide him with an advantage in order to get a permanent position in the municipality.