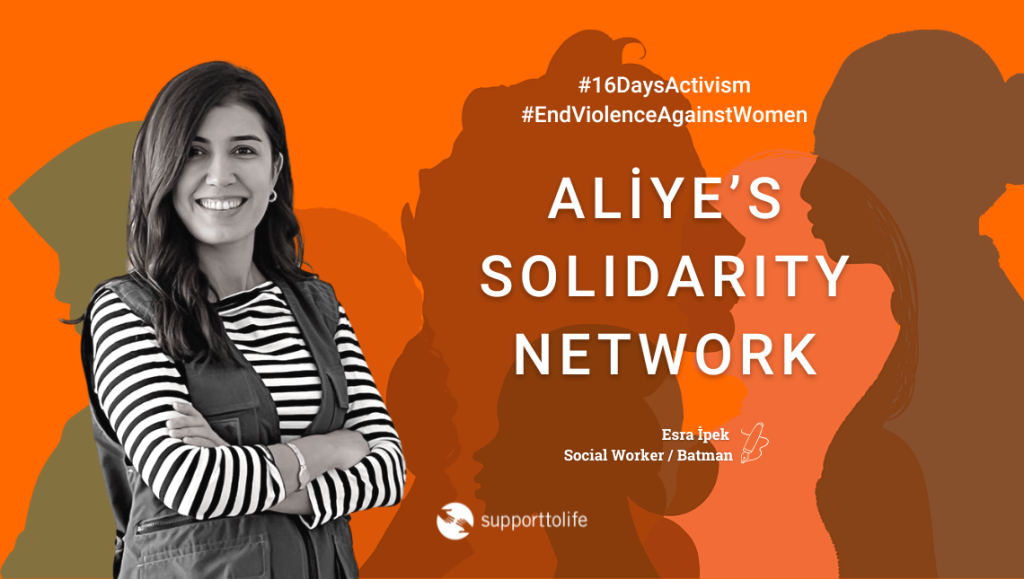 Recovering from a spiral of violence and trying to start a new life on her own, Aliye says: “I am free now, I can live by my own rules; I feel like I can breathe.” Social worker Esra İpek from our field office in Batman, Türkiye, shared Aliye’s story.

In the lives of the beneficiaries I support as a social worker, I often witness that arranged, child marriage, a big age difference between women and men increase the risk for women to be exposed to gender-based violence. The story of Aliye*, who was forced into marriage by her family, is an example of this. But now, she is surrounded with a solidarity network and has hope for leading a peaceful life.

As the implementing partner of international humanitarian organization Diakonie Katastrophenhilfe, funded by EU humanitarian aid, the purpose of our project is to assist refugees like Aliye living in rural areas, and help them access the most basic rights and services such as education, health and registration, while supporting them to stand on their own feet.

“I Had No Rights”

Aliye, who fled Syria 6 years ago and settled in Batman, Türkiye, had been married for 10 years. Her ex-husband systematically used physical, psychological and sexual violence against her from the first week of their marriage. Aliye, who has a 9-year-old son, did not think that she was subjected to sexual violence until the individual interviews I had with her. But after our discussion, she said that she realized she was subjected to both sexual and psychological violence in her marriage:

“My ex-husband was considering me as a childbirth machine. I had no rights to voice my opinion. In those years we were married, I felt very worthless, like I was nobody. First, I thought I was the reason behind the violence I was subjected to, but after receiving support from Support to Life I realized that I was not the cause of the problem. Any woman in my place would have had the same experience.”

When Aliye noticed she could not take it anymore, she decided to get a divorce, left her house and met with Support to Life.

“I came directly to you the day after I left home. During the time I was married I was withdrawn, I did not want to talk to anybody. When I decided to get a divorce and met with Support to Life, I started becoming more extroverted and sociable.”

When Aliye decided to leave home, her ex-husband did not let her take her child with her. When Aliye reached us, she requested legal support regarding divorce, alimony and custody of her child. Following our legal consultancy and information support, we referred her to the lawyer appointed by the Bar Association. We also referred Aliye, who rented an apartment for herself with the financial support of her sister living abroad, to the cash support programs from other humanitarian aid organizations. Aliye also participated in the information sessions we organized on women’s rights, gender inequality, and our sexual rights.

Despite all the problems she has experienced, today Aliye is on her way to establish a new life. The first hearing of her divorce case was held. Aliye can see her son on certain days of the week, and is hoping to get custody of her son. Aliye, who also started to work in a cleaning business in a textile workshop with the help of her neighbors, said: “I am free now, I have started a new life, I can live by my own rules. I feel like I can breathe.”

*Our beneficiary’s name is changed in the scope of protecting personal rights.